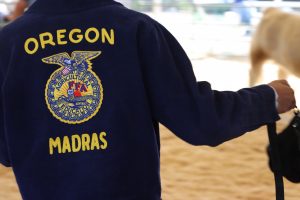 FFA Madras has reason to celebrate after how the members performed at the Jefferson County Fair. Altogether, more than two dozen students showed a range of animals from cattle, pigs, goats and sheep.

“We have champions in all four species, whether it’s in their breeding projects, or in showmanship. We had four students that were master showmen the other day,” Madras FFA Advisor Lee Hofman said. “They’ve done phenomenal, and to pat ourselves on the back a little bit on top of doing really well with their ace species with their showing Madras this year at our district livestock evaluation contest, took first in our beginning and advanced teams.”

The program aims to promote leadership, communication and public speaking skills, personal growth, and career success through agricultural education. FFA Madras is an agricultural science program that is part of the Jefferson County School District.

“I tell you what, it has only gotten better every year just in the period of time I’ve been here,” Hofman said.

Vollmer is in her eighth year as an advisor for the program. Her time has been split between JCMS and MHS. Throughout her time, the program continued to grow and she’s looking to build upon the recent success.

“We’ve branched out into state type of events and that has gotten different kids with different interests to participate,” Vollmer said. “So, every year we’re working on expanding as more kids share their interests and I continue to learn. The more you teach, the more opportunities you can give because you have more time to work on that skill.”

FFA is different from 4-H in that it is student-led. This year, Wade Simmelink is the President for Madras FFA. The group elects their student leaders every year in the spring. Simmelink is going into his junior year at Madras High School. He’s been a member of FFA since he was in 7th grade.

This year, Simmelink showed his steer for showmanship. Showmanship is when the presenter is judged on the ability to control and present the animal.

“The showing was really good,” Simmelink said. “It was a tough class but I think I did well personally and the steer was just acting up a little bit but, you know, things happen.”

It’s a long process to get the animal trained up and ready to show at an event like a county fair. Simmelink spent a lot of hours working with his steer.

“A few ways that I train him is when he’s smaller around the first few months I get him, is the easiest because he’s small and he can’t drag you around,” he said. “I just work on walking around in a circle. We have a few parts in our pen that are flat and he likes.”

One of the biggest misconceptions out there on FFA is who can be a member, according to Simmelink.

“That it’s just farmers have to be in it, and you have to be super involved in agriculture to be in FFA, which is not true,” he said. “I think we need to get more members, just to make it fun and so that’s kind of what FFA is about to me just having fun and meeting new people and learning skills like leadership.”

The program has taught him valuable life skills that he can use outside of his FFA duties from his experiences in the ring. He said if a steer goes haywire and starts running around, he can’t just give up. Instead he needs to stay under control and get the task done which is to get the animal shown and set up for the judge.

“Just like in school when you’re failing a class you don’t need to give up, you need to get on your grades and work on your homework,” he said. “So, I think there’s very transferable skills between both.”

Other FFA members show different animals. Taft Rice is about to enter his sophomore year at Madras High School. He joined FFA in 7th grade but has been showing pigs since he was in 4th grade with 4-H.

“I got second in my class for market and today I got champion showman overall,” Rice said.

He has a system when it comes to training his pigs to show well in events. He buys a couple of them every year.

“Usually you have one pig that really just aspires in the showing wise, and I work with my other pigs still but I tend to focus a lot more on the pig that shows a lot better, just because that way I know I can trust him when it comes to the ring,” Rice said.

The sophomore enjoys being a member of FFA. One of his favorite things about the program is that he continues to form quite a bit of friendships and getting the opportunity to meet people from all over Oregon, Washington, and California.

“You get to meet a lot of people and it’s pretty exciting. Just lots of, you learn a lot of different things in FFA that you probably wouldn’t learn,” he said.

One FFA member that is now on her way out is Ryane Dobkins. She is a 2021 Madras High School Graduate and first joined FFA in 7th grade too. This was her last event as an FFA member, but there was a lot about the program she enjoyed.

Dobkins showed a goat. Goats are unique in their own way since there are a bunch of different colors, and personalities from goat to goat.

“You get to really find out all their personalities along the way and you just kind of get to connect with them as they’re like your own little friends,” she said.

She showed her goat for dairy and meat showmanship and then one for market. Now that she is moving on from high school, she shared what FFA taught her and what she can use in her everyday life.

Moving into the 2021-2022 school year, both program advisors want to see the program continue to grow, but also want to reflect on this year’s success at the county fair.

“I’m extremely, extremely proud of the students that we have this year. They put their heart on the line, they’ve shown us all of the time and effort they put in these animals and we couldn’t be happier with what they’ve done this year,” Hofman said.

Vollmer echoed those statements and shared her favorite part of being an advisor for Madras FFA.

“Among many, my favorite part is teaching new skills, advising kids and then watching these leaders help each other to improve and grow,” she said.

Below is a list of Madras FFA students who showed at the fair.