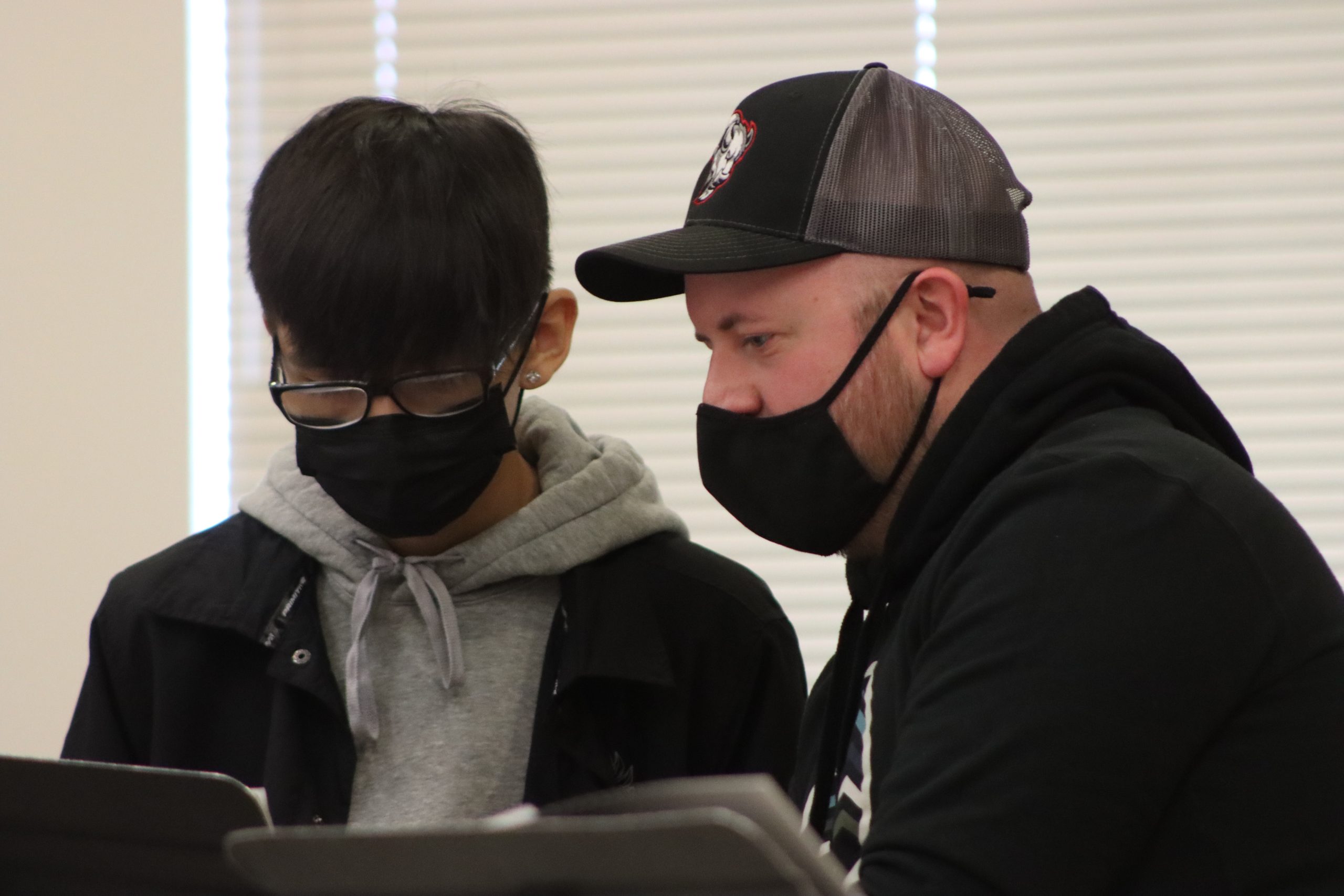 If you were to walk into the band classroom this week at Madras High School, you could almost feel the nerves among students and their director, Jared McFarlin.

“I’m nervous for one because it’s the first time back in two years, but also super excited,” McFarlin said. “I feel like the community is ready to hear us again and we’re ready to perform and just to be back doing our thing.”

McFarlin is currently in his 7th year leading the Madras High School music department. He is the school’s band director, choir teacher, and as of this year, theater teacher.

“I took over drama club and the school didn’t have a theater class, but just like band and choir, there are academic standards for theater,” McFarlin said. “So, I felt that to really build that program up we needed to offer it as a class. This is the first year we’ve offered theater as a course that students can take.”

Students in all three programs will have a part in Thursday’s winter concert. This performance will be the first one since the winter concert in 2019. The band and choir will perform songs and then they will also take a scene from the play “It’s a Wonderful Life, A Live Radio Play.” That was performed at the Performing Arts Center earlier this month. Students have been working all semester towards this concert.

“We have the upperclassmen who remember the old group and all the traditions and the memories that came along with that,” McFarlin said. “So, they’re looking forward to what they remember, but then we also basically have two whole classes of students who’ve never done this before, so they don’t really know what to expect. We’ve got the new with the old trying to make it happen, and so it’ll be interesting to see how we do but they’re excited. They’re looking forward to it.”

The concert will focus heavily on Christmas music. There will be some secular pieces and some religious pieces. The concert is expected to last around an hour. The show starts at 7pm with a silent auction at 6pm. Admission to the concert is free. The silent auction is a significant fundraiser for the music programs. The items will come from local businesses.

The band and choir programs will also have the chance to debut their new uniforms. Thanks to generous donations from the community, the school was able to purchase new tuxes and dresses for the students.

McFarlin became the band director at Madras High School in the 2015-2016 school year. He joined after working at Lone Peak High School in Big Sky, Montana for two years. He has seen much success as a White Buffalo.

“I love that there’s a lot of support from administration and from the community for the arts. When I started here, choir wasn’t quite as big as band. So, I’ve really tried to build up choir and band equally,” McFarlin said. “We found a lot of successes. We got to go to San Diego in 2017 and we actually took the gold championship award at the festival there.”

In addition to that, he brought marching band back to Madras High after a decades long-hiatus.

“I feel like we were really starting to build some momentum and get the program where it needed to be,” he said. “Then COVID hit so I feel, as with a lot of programs at the school, we’ve been knocked back a little bit. The kids are really excited to be playing again and doing their thing and I feel that momentum is starting to pick back up again.”

MARCHING IN THE ROSE PARADE

While in high school, he saw the trophy and banner from when the Sumner Spartan Band marched in the Pasadena Rose Parade. That inspired him to one day march in the Parade. In 2022, that dream will become a reality.

“So, there’s a group that has been working on this for four years trying to make this happen,” he said. “They wanted to form a marching band to honor the directors. They finally had some donors make it happen and the organization happened and so they went on the search to find band directors from every state.”

McFarlin will be one of about 280 band directors from across the country to march in the parade. However, he will be the lone participant from the Beaver State and representing Madras and the Jefferson County School District.

“Yeah. I didn’t know it’d be that honorable, you know, to be the only one representing my state but it just adds to the excitement,” he said.

The parade entry will convey the theme, “America’s band directors: We teach music. We teach life.” This is something McFarlin feels is especially true for his position at Madras High.

“I think a lot of people know we teach music, but I think what a lot of people don’t realize is all the other things that get taught alongside it,” he said. “Especially at a place like Madras where there’s a lot of need, and a lot of students coming from some hard life situations and tough backgrounds.”

McFarlin and his wife will fly out to California a few days before New Year’s so he can rehearse with the group. They will also get to see the Rose Bowl Stadium and have their picture taken on the field as well and with the float in the parade.

“To be able to honor what I do and what so many other music educators do in such a cool way, in such a visible way is really neat,” he said.

The Michael D. Sewell Memorial Foundation is the sponsoring organization behind the project.